A wonderful weekend.  On Friday morning we completed C2 and C#2, the massive bass notes for Paul’s marimba. I feel like we may be 1/2 way done at this point, but it is hard to tell… we have never built a marimba :-)  Paul has been tracking our progress, and we have put in about 75 hours so far.  If you look at our Progress-O-Meter you will see that we have finished two important steps:  cutting the blank bars (in red) and rough-shaping the bars to about 1 whole note away from final pitch (in green).  The next step will be to lay out all the bars and mark the “nodes” (see the salt test from a previous post).  We will then average them all and draw two straight lines across each row, indicating where the holes will be drilled for the supporting string. We will final sand the top and sides of each key with 220, 400, and 600 grit paper and apply several layers of rubbed oil for the finish.  The last step for the keys will be final tuning, sanding the arch until the fundamental and harmonics are in (near perfect) pitch.  Wow.  We continue to sketch out ideas for the frame… but that can wait.  Our prime objective is to finish 61 keys (pun intended). 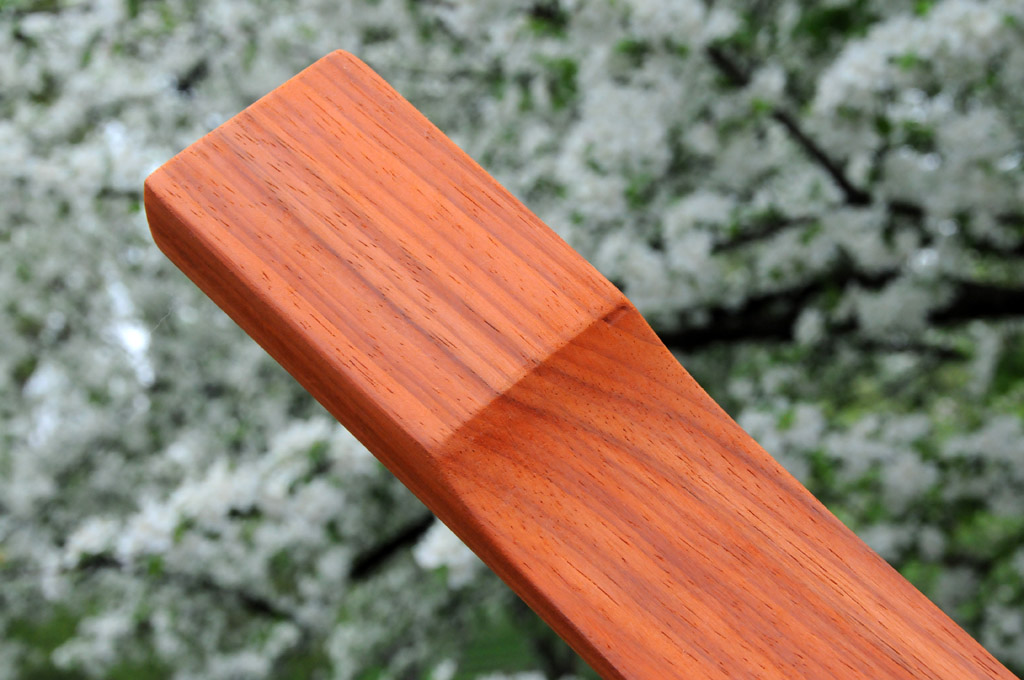 One of our more beautiful keys 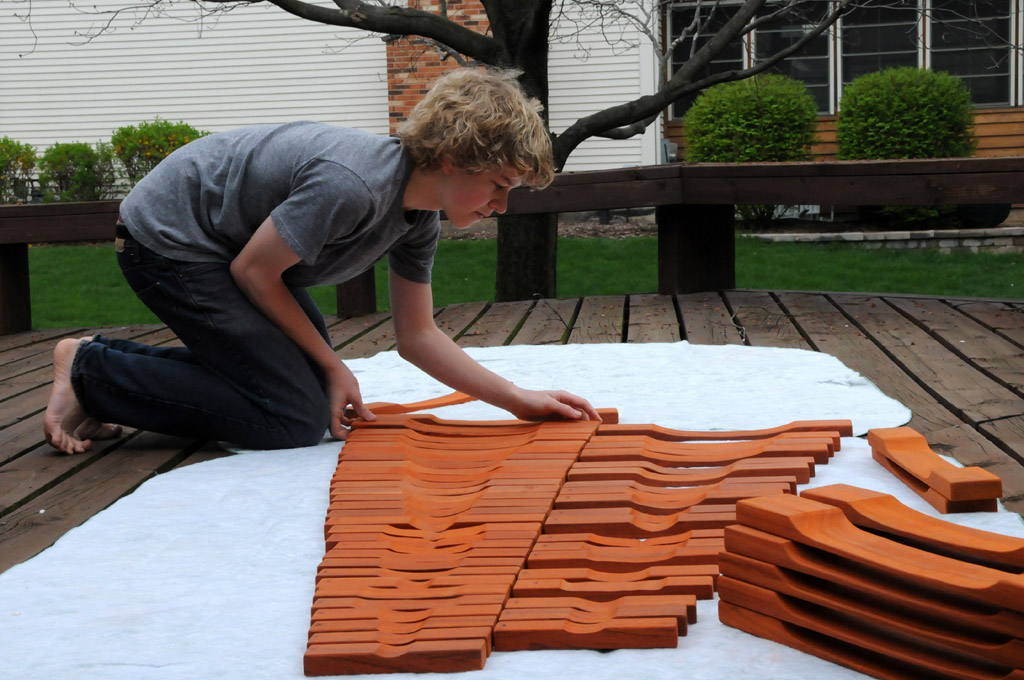 Laying out the keys (wrong side up), to get a feel for her final size

END_OF_DOCUMENT_TOKEN_TO_BE_REPLACED

This week is Paul’s spring break.  He is working on his percussion auditions for Birch Creek summer camp during the day, and I’m making it home early enough for us to make good progress on the marimba.  Last weekend we cut the last of the bars (except for do-overs that we may still need to correct…).

We are now moving down the scale from C4.  We just completed E3, and have only 16 more bars to shape.  The harmonics remain perplexing.  We have moved to using a good microphone and professional software to analyze the tones.  The iPad app we were using for the higher notes is out of it’s league.  As Paul put it… “The wood is still in charge”.  True.  We are slowly getting more proficient at shaping, but the lower notes also take more work. The result, however, is mind-bogglingly beautiful.  The wood is so rich, so stunning, it will be difficult to watch Paul strike the keys forcefully with a hard mallet.  We cannot wait to drill the holes and do final 600 grit sanding, for then we can oil the bars with natural oil and resins, and stand in awe as the grain and deep color is finally revealed.  Oh, the patient waiting… 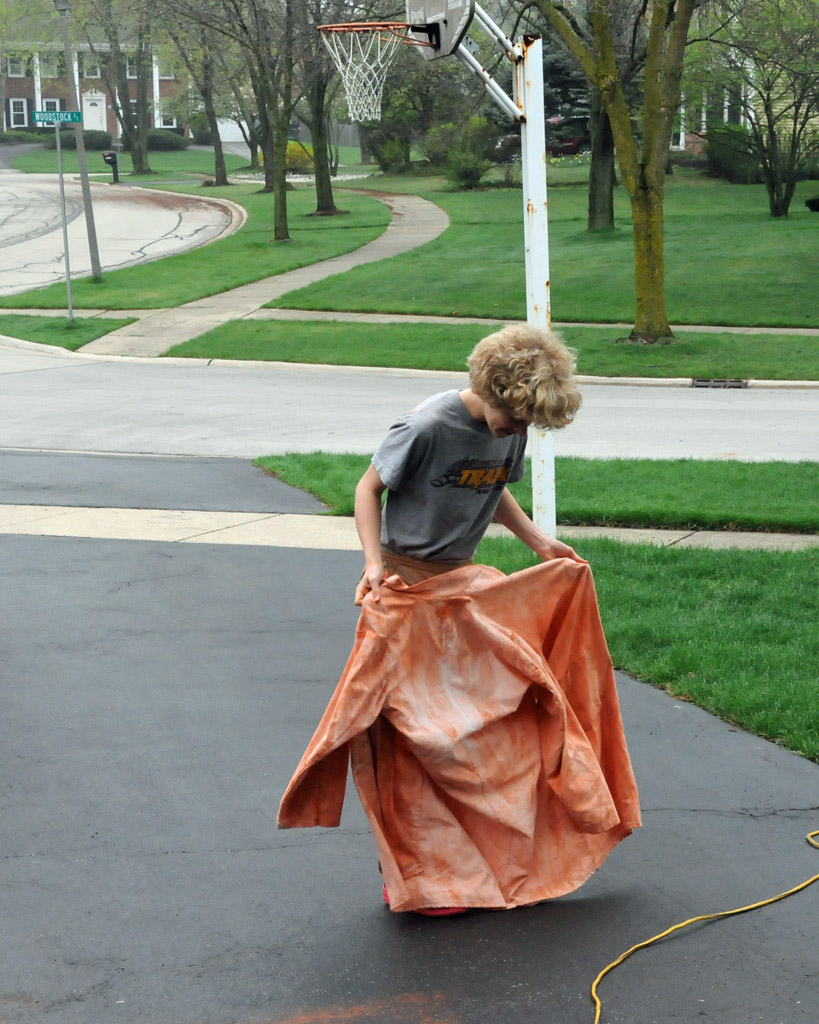 Remember “The Cat in the Hat” and the pink dress?

END_OF_DOCUMENT_TOKEN_TO_BE_REPLACED

We have had a lull.  I was in Japan for a week, then Oregon, and after two weeks we finally had part of a weekend to catch up.  Unfortunately, we won’t make much progress for another week.  Tuesday night Paul is playing a solo in the Wind Symphony concert. Paul earned his solo spot by winning the best percussion solo at Naperville North’s solo and ensemble contest with Musser’s Etude in C major.  He has since recorded his solo, so he can use it for his audition tape that will be sent to Birch Creek summer music camp.  Then… Jazz Band leaves Wednesday for New Orleans.  He won’t return until 3:00pm Sunday.  He is learning the life of a musician all quickly.

The QuickTime video below takes a while to download.  Patience?  The video clearly answers the question “Why build a marimba?”.  Despite the look of total intensity in Paul’s eyes, he absolutely loves playing it. He cannot imagine going the summer without one.  He plays the school marimba each day at lunch and 2 or 3 times a week after school.  He has also started imagining putting together an album of Chopin Nocturne pieces over the summer. 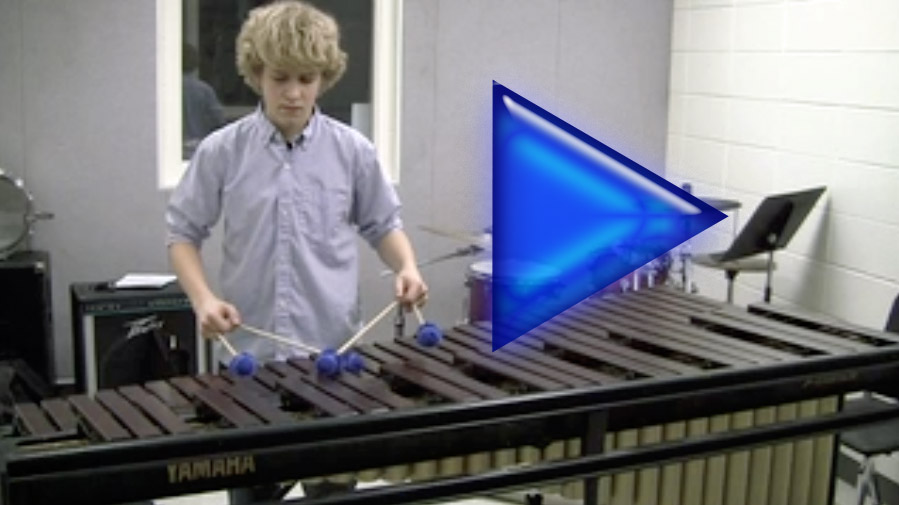 Sit back, get a cup of coffee or tea, and we will explain what we have learned… some of our education has come the hard way.

Musical instruments are complex. Middle C (C4) sounds different on a piano, flute, guitar, trumpet, and marimba because each has a unique timbre.  Each may play the same note (the fundamental), but the tone is accompanied by dozens of harmonics, usually interesting multiples of the basic note. A common harmonic to be carried along with the fundamental tone is an octave. (twice the fundamental).  For example, the “A” above middle C is usually 440 Hertz, or 440 cycles per second.  Or, if you can imagine an old fashioned speaker vibrating in and out, it would have to do that 440 times a second to play a A4.  The A5 an octave above that is double in frequency, or 880 Hertz.  A6 is double that, or 1760 Hz. So integer multiples of the base frequency (2f, 3f, 4f, etc) are the common harmonics that are heard along with the fundamental (the pitch being played)

That sounds so simple.  Such beautiful math.  Of course, doubling (2X) the frequency (Hertz) for every change in ONE octave means the pitch and frequency are related through a logarithm… Moving a note up THREE octaves (from A4 to A7 for example) means multiplying the frequency by EIGHT.  Moving a note down TWO octaves (from A4 to A2) means dividing the frequency by FOUR. Again, beauty.  We will skip the discussion of the equal temperament scale (12th roots are required) for now.  Just marvel at the beauty of how frequencies with wonderful ratios are perceived as different pitches by the human ear.

So, why do we care about this to tune our marimba?

A simple penny whistle or flute has a very clean sound.  The note that is played (the fundamental) is what you hear loudest. That’s because the flute is a very pure instrument.  The column of air inside the flute is what vibrates to make the sound, not the metal flute. So even though Harold Hill may try and sell you on something better, a silver, gold, platinum, and nickel flute will all sound mostly the same — it is the column of air that is vibrating that makes the sound, and air is free.

However for a marimba, there are two parts needed to make music, the wooden bar, and the resonator (the column of air in a tube below it).  Unlike the resonator, with it’s simple column of air, the wooden bar vibrates in VERY complex ways and therefore produces several harmonics simultaneously (its timbre). The choice of wood affects how the wood will “sustain” after being struck, how fast certain harmonics decay, and the strength of various vibrational modes. A marimba bar does not just vibrate in a simple up and down wave motion (transverse mode), like a guitar string, but also twisting back and forth (torsional mode) and wiggling side to side (lateral mode).  However for Paul and I, we are only going to try and tune the transverse modes of the “first” and maybe the “second” harmonic after the fundamental.

Ok, that was the background :-)  Now the problem with tuning…. 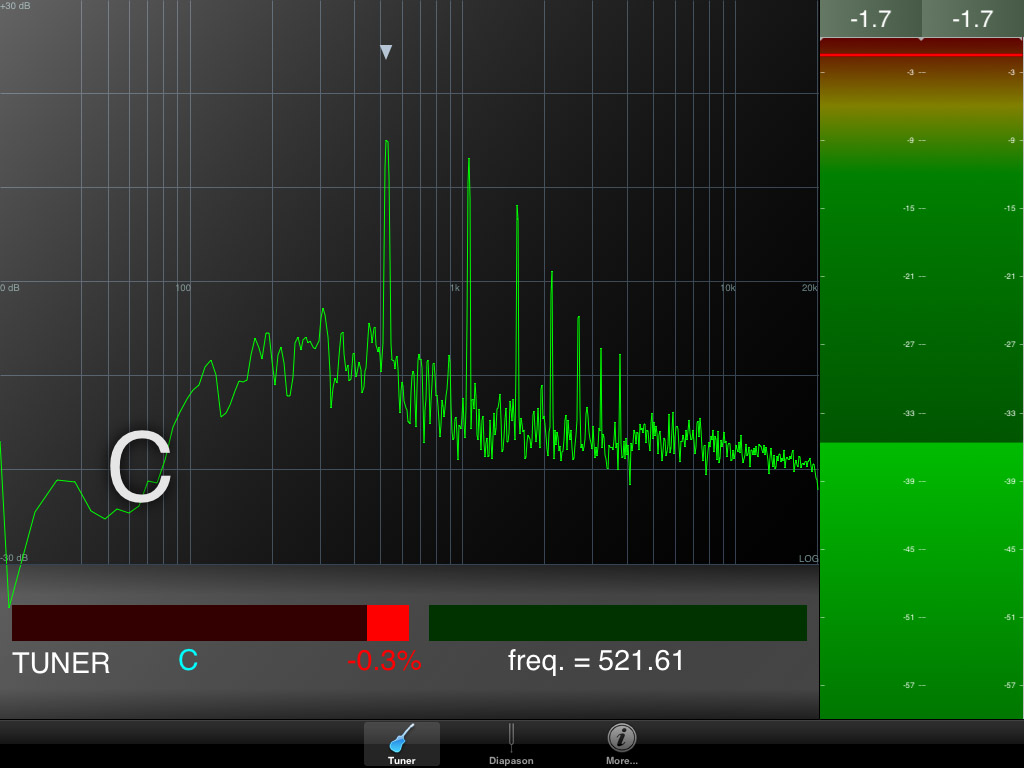 A “C” on our Baldwin baby grand. The leftmost peak with the arrow above it is the fundamental. The other peaks are the 6 harmonics

Using a combination of the spectrum analyzer and END_OF_DOCUMENT_TOKEN_TO_BE_REPLACED

Today we ripped 25 keys in a little more than 3 hours in the garage.  Whew! It is hard to imagine how someone would build a marimba with hand tools.  We have all but 11 keys of the 61 key marimba now cut.  We put a small space heater in the garage in an attempt to convert Antarctica into only Minnesota. Meanwhile, we spent a bit more time double checking dimensions and laying out the keys, so our time in the garage would be more efficient. 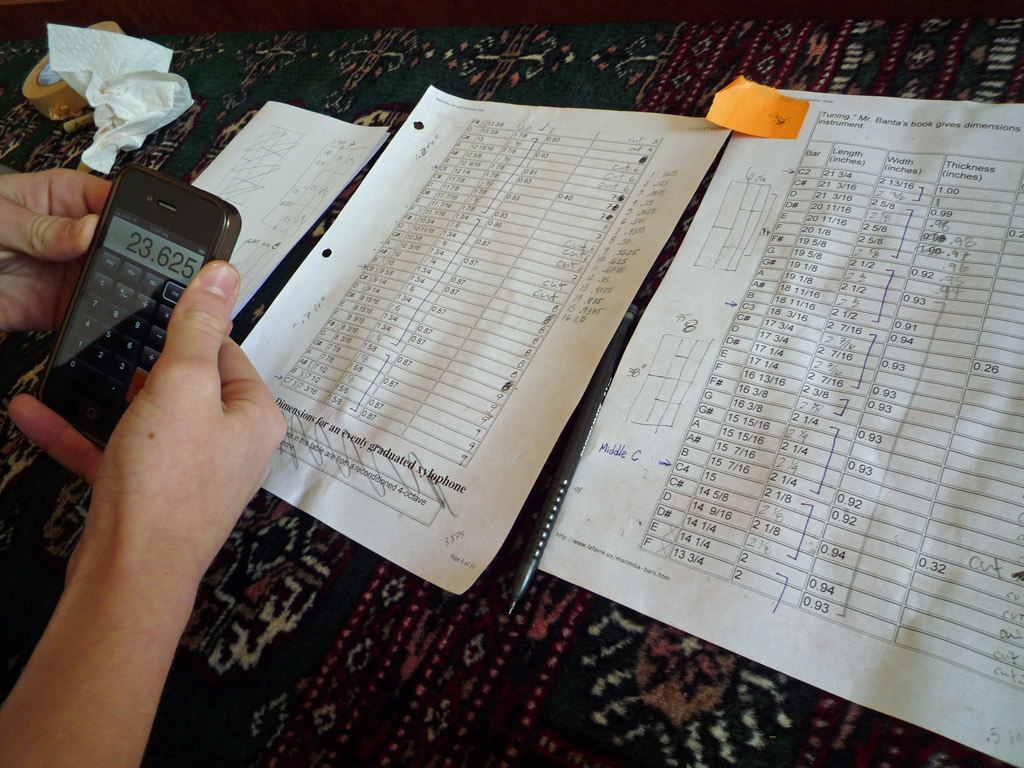 END_OF_DOCUMENT_TOKEN_TO_BE_REPLACED

Paul and I are building a Marimba.  Wow.

How did we get here?…  Paul enjoys playing marimba and vibes.  For a while, we rented a small marimba with synthetic bars.  It lived next to the piano at times, or in Paul’s studio when he wanted to record.  But as Paul played more advanced pieces, he began to need more range — a bigger instrument.  Unfortunately, 5 octave marimbas are expensive to rent… a professional 5 octave marimba rents for $200 a day, so even a cheap practice marimba is a bit costly. 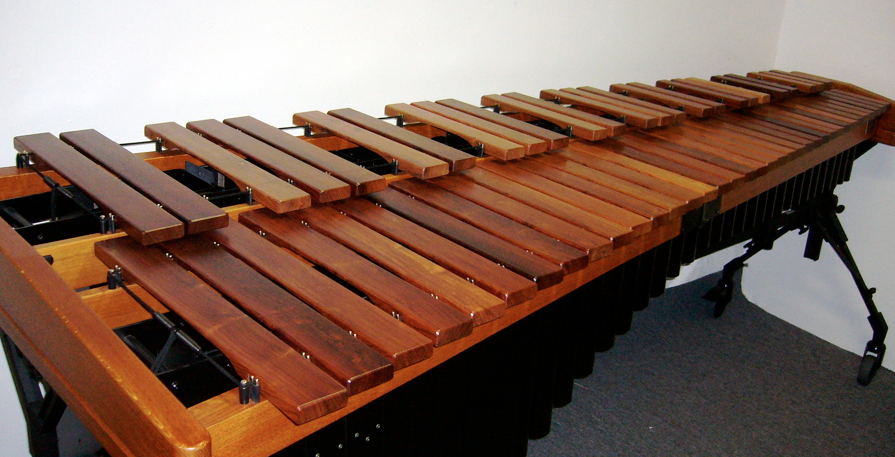 An example of a wonderful professional marimba.

So… why not build one?  Several sites on the web have instructions or tips on construction.  Mechanically, a marimba is a END_OF_DOCUMENT_TOKEN_TO_BE_REPLACED 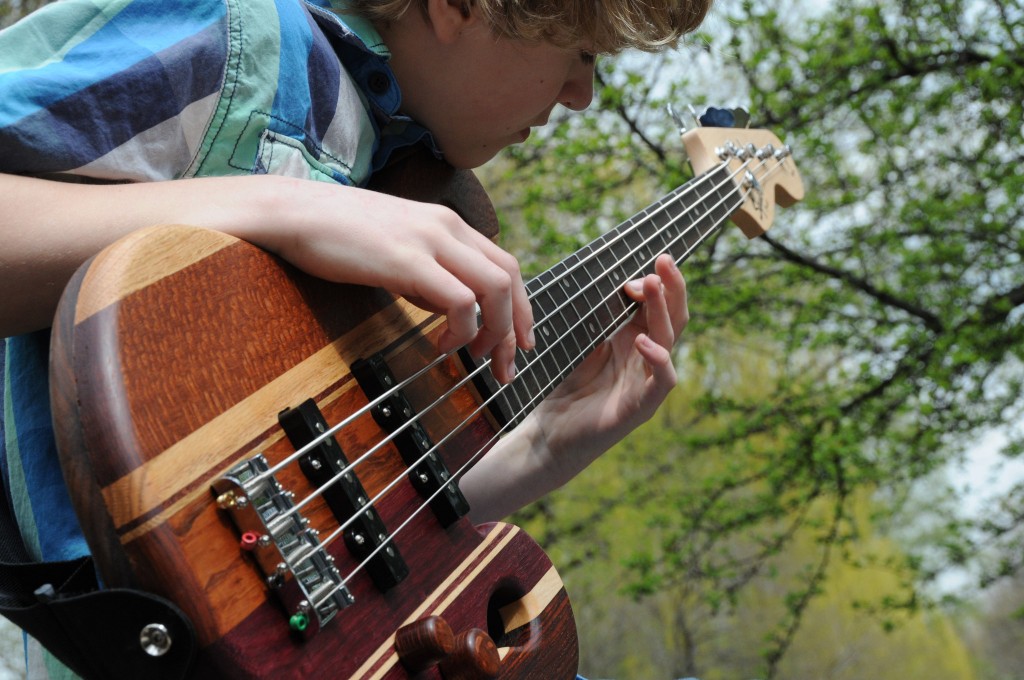 Today we celebrate.  Yesterday we tightened the last bit of chrome on her golden body.  Three months ago our hands drew wide and curvy shapes in the air.  We sketched plans in our pocket journal.  We visited the hardwood store, carefully weighed beams in our hands, stroked curly grains and went home with nothing but splinters — reconnaissance before buying.  Cutting, sanding, gluing, measuring, and imagining brought the amber, purple, and coffee colored planks to life.  Her natural linseed oil finish glows softly.  Paul is proud of his masterpiece.  With this post, the project is complete. Fini! A few more pictures here…. END_OF_DOCUMENT_TOKEN_TO_BE_REPLACED